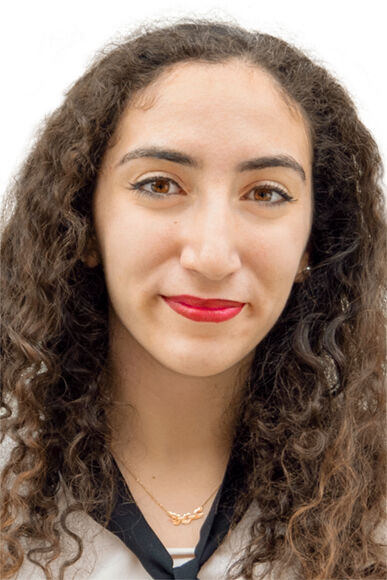 Aziza Almanakly is the child of immigrants from Syria

Born and raised in Northern New Jersey, Aziza Almanakly is the daughter of Syrian immigrants, who came to the United States in the early 1990’s in pursuit of academic opportunities. Growing up, Aziza was surrounded by the energy of the music of Amr Diab, the superstition of the evil eye, the warmness and hospitality, and the overall enthusiasm of Syrian culture, and she only spoke Arabic until entering elementary school. As the civil war in Syria grew dire, more family members sought asylum in the US, and Aziza was fortunate enough to grow up around cousins and aunts and uncles, who built a new version of their Syrian home in New Jersey.

Following in the footsteps of her mathematically minded father, Aziza chose to study electrical engineering in college at The Cooper Union for the Advancement of Science and Art. In those four years, she gained more than technical training; she learned first-hand the importance of strong mentorship in diversifying engineering to expand the capabilities of budding technologies. Aziza pursued teaching and mentorship opportunities, using her unique experience as a New American and one of few women in her class to encourage younger students of underrepresented backgrounds in New York City to enter STEM.

After reading about quantum computing in the Wall Street Journal, Aziza was eager to become a part of the present-day scientific revolution. The realization of quantum computers would provide unprecedented computational power to analyze and manipulate complex natural and man-made systems; from protein simulations for drug-related research, to unbreakable data encryption for network security. Throughout her time as an undergraduate, Aziza pursued research opportunities in experimental quantum computing at Princeton University, the City University of New York, New York University, and the California Institute of Technology.

Aziza is currently a PhD student in electrical engineering and computer science at the Massachusetts Institute of Technology. She is researching microwave quantum optics with superconducting qubits for quantum communication under Professor William Oliver. Aziza’s career goal is to engineer multi-qubit systems that push boundaries in quantum technology.