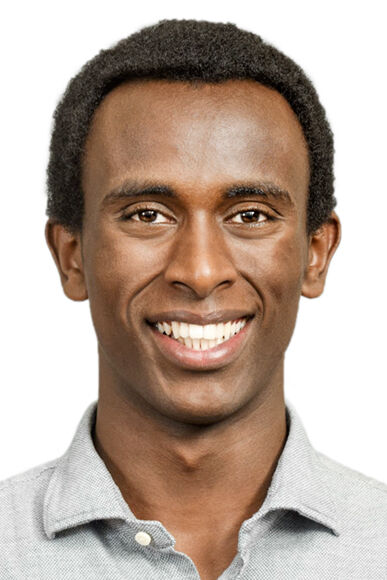 Biya Haile is an immigrant from Ethiopia

Biya Haile was born and raised in Addis Ababa, Ethiopia. A natural engineer, he worked in his dad's workshop and volunteered at automotive﻿ garages from the age of 10—beyond working on cars, Biya was always building simple devices to resolve problems in his community, such as a sprinkler made of used PVC pipes to help cultivate indigenous trees. These projects quickly developed into a passion that set Biya on a path to study engineering and nanotechnology.

Biya was 10 when his mother emigrated to Kenya and then the United States to escape poverty and a corrupt government that was constantly oppressing people like her based on her Oromo ethnic identity. Seven years later, Biya and his two sisters immigrated as refugees and joined their mother in Norcross, Georgia. Optimistic about high school in the US, Biya quickly learned English by reading books and watching movies like Ice Age. He worked hard to rank in the top five percent of his high school class, becoming a standout in running and lacrosse, and earning several college scholarships.

While studying at Kennesaw State University, Biya became an airplane mechanic and learned to fly aircrafts such as the Cessna 150 and 172, before transferring to Georgia Tech to pursue a degree in mechanical engineering. Since the summer of 2018, Biya has researched in Georgia Tech’s Institute of Electronics and Nanotechnology under Professor Oliver Brand, developing microelectromechanical systems-based gas sensors. Biya balanced research with a student assistantship in the micro-fabrication department with Dr. Hang Chen. Despite a demanding personal and professional schedule, he earned a 2019 Goldwater Scholarship and received a 2019 Tower Award for outstanding academic performance. As a UN Millennium Fellow, Biya leads a team engaging Georgia Tech students with refugees in the Atlanta-area by organizing events that support refugee communities.