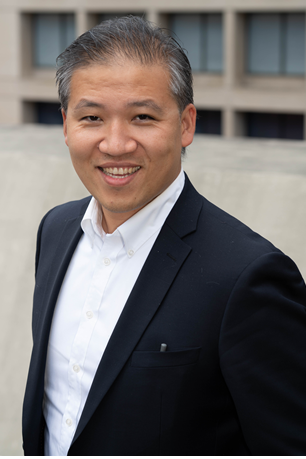 Eric Feigl-Ding is an immigrant from China

Dr. Eric Feigl-Ding is an epidemiologist and health economist and a Senior Fellow at the Federation of American Scientists in Washington DC, and the Chief Health Economist for Microclinic International.

He was previously a faculty and researcher at Harvard Medical School and Harvard Chan School of Public Health between 2004-2020, and an epidemiologist at the Brigham and Women's Hospital.

In January 2020, he was recognized in the media as one of the first to alert the public on the pandemic risk of COVID-19. He focuses his efforts on analyzing COVID-19 trends, stopping COVID-19 misinformation, advocating for public health, and improving health policy.

He was noted in his role as a whistleblower and leader of a key two-year-long investigation into the controversial drug safety and risk data of Vioxx®, Celebrex®, and Bextra® that drew FDA and national attention. Highlighted and express-published in JAMA, as a corresponding joint-first author, he was also recognized for his role in the New York Times, and in the book Poison Pills: The Untold Story of the Vioxx Drug Scandal.

A childhood survivor and cancer prevention advocate, he was called one of the ‘Facebook philanthropists‘, founding the 6 million member online Campaign for Cancer Prevention, featured in Newsweek magazine in 2007. In total online reach, he previously directed disease prevention advocacy platforms with over 10 million members on Facebook Causes. He led the first ever direct-to-science online crowdfunding initiative, fundraising over $500,000 (median public donation $15) for medical research, led a partnership with Brigham and Women's Hospital, and was featured in the New York Times in 2009.

In the aftermath of the Flint Water Crisis, he founded the first geo-social network and public alert system for drinking water toxic contamination, as featured in WIRED. He established the Toxin Alert Drinking Water Database with 500,000-locations nationwide for informing the public about water hazards in communities. For his work, he was awarded the 2017 Mark V. Anderson Leadership Award from Sigma Chi Foundation.

Previously, during the 2014 Ebola pandemic, he led a team to co-develop one of the first mobile contact-tracing applications for infectious disease outbreaks. The project was shelved after a lack of interest in pandemic preparedness technology. His early contact-tracing app's contributions lived on to inform the later designs of contact tracing apps developed during the COVID-19 outbreak.

He has published in leading journals, including the New England Journal of Medicine, Journal of the American Medical Association, The Lancet, and more. His 150+ publications have received 85,000 citations (H-Index 81). As a Web of Science Highly Cited Researcher, he was ranked in 2018 as among the Top 1% of all scientists worldwide, and named among the 186 top cited scholars across Harvard University.

Altogether, his competitively awarded projects as PI/Director have received over $10 million in funding. A World Economic Forum Global Shaper, he has chaired committees for the Health Directorate of the European Commission, advised the World Health Organization, Denmark Ministry of Health, and served as a member of the Global Burden of Disease Project. He also advised and successfully convinced the C-suite leaders of a major Fortune 100 food/beverage company to adopt the WHO health recommendations for added sugars. He has also advised many governors, state legislators, members of Congress, and other world leaders.

Dr. Feigl-Ding graduated from The Johns Hopkins University with Honors in Public Health and Phi Beta Kappa. He then completed his dual doctorate in epidemiology and his doctorate in nutrition separately, as the youngest graduate to complete his dual doctoral programs at age 23 from Harvard SPH. Concurrently with his postdoctoral fellowship at Harvard SPH, he studied medicine at Boston University School of Medicine for several years, until he left BUSM to become faculty at Harvard Medical School. Teaching at Harvard for over 15 years, he has advised and mentored two dozen students and lectured in more than a dozen graduate and undergraduate courses, for which he received the Derek Bok Distinction in Teaching Award from Harvard College.