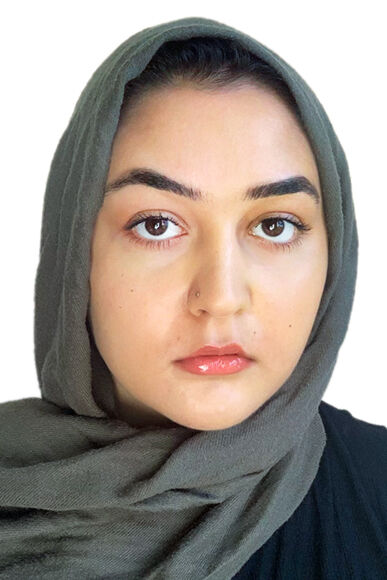 Hajjar Baban is an immigrant from Pakistan with Afghan Kurdish heritage

Hajjar Baban is an Afghan Kurdish poet who was born in Pakistan and immigrated to the United States with her parents when she was two. Hajjar’s mother had sought refuge in Pakistan from the Soviet invasion of Afghanistan, where she was born, and Hajjar’s father had escaped persecution in Pakistan as a Kurd in Iran. Having arrived in the United States with no real community, Hajjar and her siblings grew up in Dearborn, Michigan. In high school, through a Google search of poetry slam events in the area, she began writing with InsideOut, a Detroit literary arts program. She later served as the 2017 Detroit Youth Poet Laureate, and after this success, the organization expanded their after-school writing program, CityWide Poets, to include Dearborn Public Schools.

She attended the University of Wisconsin-Madison through the First Wave Scholarship Program, the first and only full-tuition scholarship for urban arts, where she majored in English and creative writing. She also studied Persian, Arabic, and Pashto in an effort to usher in more possibilities for her writing. Hajjar has received both university awards and those from literary magazines, including the Charles M. Hart Jr. Writers of Promise Award, George B. Hill Poetry Award, the Ron Wallace Poetry Thesis Prize, the Gearhart Poetry Prize, and the Matt Clark Editors’ Choice Prize. In addition, during her time at UW-Madison, Hajjar published two chapbooks, Relative to Blood and What I Know of the Mountains. Her work has since appeared in The Offing, Foundry Magazine, and Asian American Writers’ Workshop magazine, among others. She is a Best New Poets, Best of the Net, and Pushcart Prize nominee.

Hajjar currently attends the University of Virginia where she is a candidate in the Master of Fine Arts in poetry program. She recently completed her first full-length poetry manuscript, Singular Wreckings. Beyond the MFA, she plans to hold writing fellowships and teach at the university level. As much of Hajjar’s work touches concepts of nation and belonging, Hajjar continues to look for opportunities to be in community with immigrant writers, whether as a mentor or student herself.