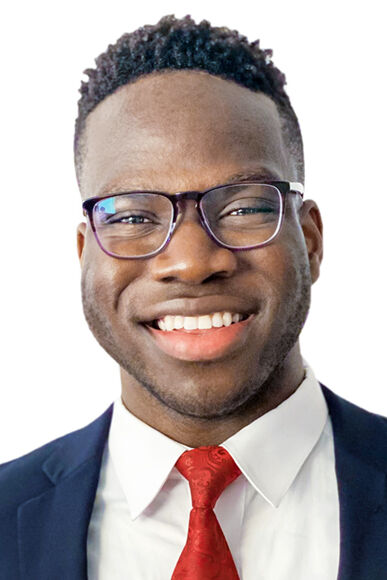 Harold Ekeh is an immigrant from Nigeria

Born and raised in Lagos, Nigeria, Harold Ekeh moved to the United States with his parents and three brothers when he was eight. The following few years taught him the importance of optimism, a mindset that did not come easily. His father, Paul, went from working at the helm of a civil engineering company in Anambra State to selling ties and threads at a suit supply store in Queens. His mother, Roseline, picked up a job at the local Target. Despite various phases of transition and displacement, Harold’s family focused on educational opportunities and building community, which helped them as they rebuilt their lives from the ground up.

Harold went to high school in Elmont, New York, where he was an Intel Science Talent Search semifinalist and went on to be the first in his family to go to college. At Yale University, he built on his interests in healthcare policy and law and majored in political science and government. He worked as a legislative fellow with the Congressional Black Caucus during his sophomore summer where he developed a passion for voting rights after learning about the gutting of the Voting Rights Act and the resulting policy implications for Black and Brown communities.

In the fall of 2017, he cofounded Every Vote Counts (EVC), a student-led, nonpartisan organization dedicated to increasing voter turnout nationwide and expanding voter access. On over 50 college campuses, EVC focuses on voter engagement, civic education, and pro-voter advocacy and reform. He serves on the executive board of EVC where he oversees EVC’s growing chapter network, student advisory board, and national strategy. Harold also currently works as the special assistant to the president at the Brennan Center for Justice.

Harold’s writing has been published in the Washington Post, Buzzfeed News, The Hill, and Real Clear Policy and his work has been cited by the Wall Street Journal, the New York Times Editorial Board, and USA Today. As legal challenges that seek to undermine ballot access surge—especially in Black and Brown communities—he is eager to work to defend the rights of the disenfranchised and under-resourced. Harold believes in the promise of America, and it inspires him to fight for innovative policies and meaningful interventions that foster integrative social change.