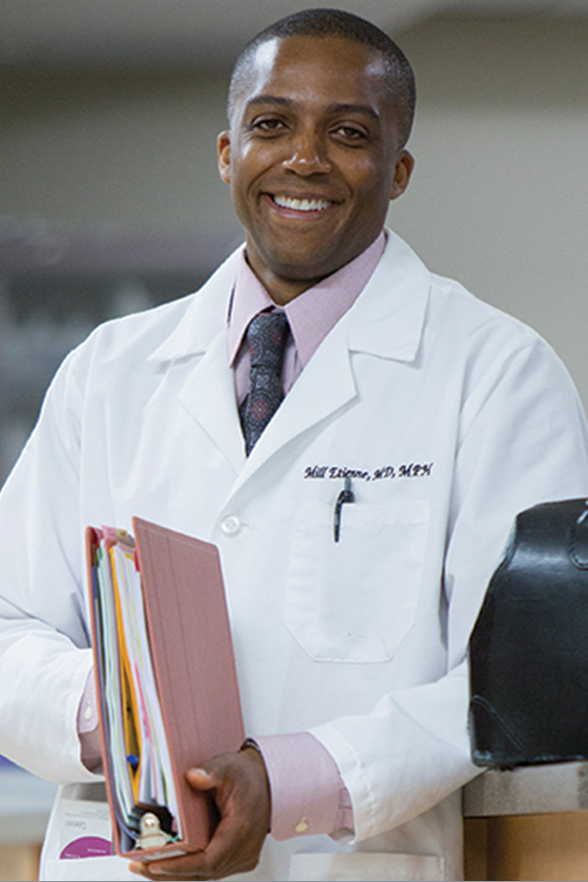 Mill Etienne is an immigrant from Haiti

Mill is a neurologist and epileptologist, with additional specialization in brain injury medicine.  Mill is a fellow in the American Academy of Neurology.  He currently works for Bon Secours Neurology Group, part of the Westchester Medical Center Health network.  He is assistant professor of neurology and advisory dean of students at New York Medical College.  He is also a visiting scholar at the National Center for bioethics in research and health care at Tuskegee University.  He is also chief neurologist for the US Naval Reserves.

Mill was born in Port-au-Prince, Haiti, and came to the United States at age five, settling in Spring Valley, NY.

Mill did his undergraduate studies at Yale University. Throughout high school and college, Mill hosted a local television program that focused on presenting positive role models to the youth in Rockland County.  Upon graduating from Yale University, Mill moved on to New York Medical College where he served as an officer in the student senate and served as an instructor and coordinator of the Science and Technology Enrichment program for underprivileged high school students. While in medical school, Mill also served as the National Speaker of the House of Delegates and National Parliamentarian for the Student National Medical Association.

Mill completed his neurology residency, epilepsy fellowship, clinical neurophysiology and neuroepidemiology fellowships at Columbia University's Neurological Institute of New York.  While at Columbia he also completed coursework to obtain a Masters in Public Health from Columbia's Mailman school of publich health.  After completing his fellowship training, Mill did a voluntary recall to active duty and was stationed at the Walter Reed National Military Medical Center.  There he was the founding director of Walter Reed's comprehensive epilepsy center.  In January 2010, Mill was deployed on the USNS Comfort as part of Operation Unified Response which provided relief to the people of Haiti following a catastrophic earthquake.  While on board the Comofort, Mill served as chief ethicist.   Mill's work in Haiti resulted in cover page articles in the Baltimore Sun, USA Today.as well as numerous additional articles in major newspapers around the world.  Mill has over 50 publications which span peer reviewed journals, invited articles, and book chapters.