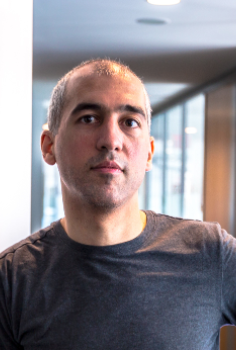 Ramzi Kassem is an immigrant from Syria

Ramzi Kassem is a Senior Policy Advisor for Immigration at the White House Domestic Policy Council and both a Professor of Law and the Founding Director of CLEAR at the City University of New York. His writing, teaching, and clinical legal practice all aim to contest the expressions and excesses of the sprawling U.S. security state, both domestically and abroad.

In support of clients, communities, and social movements, Professor Kassem and his students have litigated civil rights, constitutional, criminal, immigration, national security, wartime detention, and war crime cases at all levels of the federal judiciary, before military commissions and international tribunals, and in various administrative proceedings.

Professor Kassem and his students have also defended fifteen prisoners of various nationalities incarcerated without fair process at Guantánamo Bay, Bagram Air Base, and other secret or disclosed U.S. facilities worldwide. Their advocacy at all levels of the federal judiciary, in military tribunals, before administrative and international bodies, and in the media has established important law-of-war precedent and resulted in the liberation of eleven clients so far. This includes the only prisoner released from Guantánamo during the Trump administration, for whom Professor Kassem was lead defense counsel before a Military Commission on charges of war crimes in United States v. Ahmed al-Darbi. In this larger context, Professor Kassem negotiated client repatriations or resettlements in Algeria, Saudi Arabia, Senegal, the United Kingdom, Uruguay, and Yemen.

Domestically, Professor Kassem has appeared as defense counsel or advised defense teams in federal terrorism cases, including United States v. Uzair Paracha, which resulted in the exoneration and repatriation to Pakistan of his client after seventeen years of incarceration. Professor Kassem and his students have also defended numerous immigrants and asylum-seekers in immigration court, before the Board of Immigration Appeals, and in federal courts.

Professor Kassem was part of a three-member delegation of international legal experts invited by the International Federation for Human Rights (FIDH) to assess the state of emergency in France. He was tasked by the Public Interest Law Network (PILnet) to lead a feasibility study on clinical legal education in Tunisia. He has lectured broadly overseas, including in France, Germany, Italy, Lebanon, Mexico, Morocco, Poland, Switzerland, the United Arab Emirates, and the United Kingdom. In connection with his cases, Professor Kassem has also conducted fact-finding missions in Afghanistan, Bahrain, Saudi Arabia, the United Kingdom, and Yemen.

Since 2009, Professor Kassem has served as the founding director of CLEAR, an award-winning clinic at CUNY School of Law. For over a decade, he also directed or co-directed the law school’s Immigrant & Non-Citizen Rights Clinic. Before joining the CUNY faculty, Professor Kassem taught law at Yale and Fordham.

In addition to law review articles and contributed book chapters, Professor Kassem’s writing has been published in The New York Times, The Washington Post, The Nation, The Guardian and other outlets. He is also frequently interviewed and quoted in these major news outlets and beyond.

Professor Kassem is a proud immigrant, an incorrigible New Yorker, and a Paul & Daisy Soros New American Fellow. He is a graduate of Columbia College and holds law degrees from Columbia Law School, where he was a Senior Editor for the Columbia Law Review, and from the Sorbonne.

In 2020, Professor Kassem was named to the inaugural class of Freedom Scholars selected nationwide in recognition of their work towards social, racial, and economic justice.