“I was never supposed to be the guy giving speeches in rooms like this...[but] throughout my life, I was fortunate to have had teachers and mentors who were able to see something in me before I was able to see it in myself. And that has made all the difference.”

Vivek Hallegere Murthy spoke these words upon assuming command as the 19th Surgeon General of the United States. For those of us who know Vivek, it was typically humble—and the rest of his address channeled the sincerity and soaring vision that he pairs inimitably. Yet it also seemed, in a sense, inverted, because he’s precisely the guy we want giving those speeches, and there are so many of us he has taught and mentored. As my supervising physician when I was a resident, Vivek taught me how to know when to slow down within the frenetic pace of the hospital, to center myself to become a better doctor for my patients. As a cofounder of Doctors for America, he showed the simple power of direct advocacy, contributing to a movement that wrought health care reform in the United States. And through a turbulent confirmation process, Vivek demonstrated grace and resolve, even when the odds were long.

We live in an unprecedented time of change and opportunity in global health. Leaders must shape a public health vision around scientific advances and new ways to engage people and communities. Surgeon General Murthy is that kind of leader.

Article by Dave Chokshi (2005), assistant vice president in the Office of Healthcare Improvement at the New York City Health and Hospitals Corporation

FOUNDERS OF THE ESPERANZA EDUCATION FUND
2003 AND 2006 FELLOWS

Alice Wang and Alvaro Bedoya are pioneers with a purpose. Plenty of people have good, even noble, intentions, but how many actually put their money—not to mention time, energy, effort, ideals, and heart—where their mouth is? Alice and Alvaro took on the ambitious feat of creating the Esperanza Education Fund, a scholarship and mentorship program that honors the brightest young immigrant students in the DC area, regardless of ethnicity, national origin, or immigration status (these uniquely inclusive eligibility parameters merit my deep respect). The fund has awarded over half a million dollars in just six and a half years and is almost entirely run by volunteers. How did it start? Alvaro e-mailed The Paul & Daisy Soros Fellowships listserv looking for someone who might help make the idea of an immigrant scholarship a reality. Alice responded. Soon enough, Alice’s husband, Andy Felton, joined the small team that built what Esperanza is today. I had the honor of performing twice for Esperanza’s annual benefit. On both occasions I was embraced with open arms by the entire Esperanza community, a cohort of passionate, down-to-earth individuals brought together by the galvanizing leadership of Alvaro and Alice. This year, Alice will have transitioned out of the leadership, passing the torch to a new generation, after having created something sustainable, impactful, and vital. Alice and Alvaro genuinely embody the word esperanza; their contributions give deserving students hope for the future, and light the way forward for our communities, our country, and our world.

COMPUTER SCIENTIST
1999 FELLOW
Imagine a world where machines can see, providing an extra set of eyes to help in the hospital or assist rescue workers in a disaster zone. In her recent TED talk, Fei-Fei Li not only imagines such a world, but described how she has spent the last 15 years working toward this goal with her research. As director of the Stanford Artificial Intelligence Lab and Vision Lab, she has advanced the field of computer vision, which aims to give computers image-processing capabilities similar to humans’.
Her many contributions include the creation of ImageNet, the first database of its kind, which holds millions of images identified by humans. This database is open to the research community for training computer software to "see.” For her work, she has won numerous awards, including the 2011 Alfred P. Sloan Research Fellowship, the National Science Foundation CAREER award, and the Google Research Award. Her vision of the future has been featured in the New York Times, Science, Wired, and the PBS NewsHour.
However, no amount of awards and accolades can capture the excitement and chills generated for the viewer during her TED talk, when she demonstrates the fruit of her research. As Fei-Fei flashes images on the screen, a computerized voice creates full sentences, interpreting them at the level of a human child. While Fei-Fei acknowledges that there is still much to accomplish, her work has laid the foundation for turning science fiction into reality.
Article by Roxana Deneshjou (2014), MD/PhD candidate at Stanford University

Physician, anthropologist, and producer Mehret Mandefro has woven her triplicate threads into a film that made ripples when it splashed onto the Sundance scene and Berlinale last year, becoming the first film to ever win audience awards at both festivals.

Inspired by a true story, Difret—Amharic for “courage”—is a narrative feature produced by the Ethiopian American Mehret (also on the producing credits: Angelina Jolie) about the defining court case that outlawed kidnapping child brides in Ethiopia. Written and directed by Mehret’s filmmaking partner and husband, Zeresenay Berhane Mehari, the story centers on Hirut, a bright young girl walking home from school in 1996 when a group of men kidnap her to force her into marriage—a common practice. Brave Hirut tries to escape, grabbing a rifle and ending up shooting her would-be husband. The film also follows Meaza Ashenafi, the unwavering female lawyer who takes on Hirut’s case and succeeds in challenging the entire entrenched system.

In the world of music, Lei Liang is soaring. The Wire magazine called him “one of the most exciting voices in New Music.” In recent years, he has been the recipient of a Guggenheim Fellowship, an Aaron Copland Award, and the 2011 Rome Prize. In 2015, as if all that weren’t enough, Lei was named a finalist for the Pulitzer Prize for Music for his concerto Xiaoxiang.

Xiaoxiang evokes a tragic event in Chinese history that took place in an area within the Hunan province for which the piece is named. The story, which took place during the Cultural Revolution, goes something like this: a woman took revenge on a local official for the killing of her husband by wailing like a ghost in the forest behind the official’s residence every evening. Eventually, she drove both the official and herself insane. The role of the concerto soloist in Xiaoxiang is striking and unusual: Lei notes that “instead of displaying technical virtuosity, the soloist in this piece portrays the protagonist’s inability to articulate or utter.” He has said that it might be perceived as “an anti-concerto.” The Pulitzer Prize committee describes Lei’s concerto as “blending the curious sensations of grief and exhilaration.”

Attorney, professor, and legislator Cyrus Habib engages deeply and diversely with the law. He practices it at Perkins Coie, teaches it at Seattle University School of Law, and makes it as a newly minted Washington State senator.

Cyrus has introduced policies in his state to limit carbon emissions, expand ride-sharing services, spur entrepreneurship through investor crowd-funding, and raise cigarette taxes to fund cancer research, prevention, and care. He is also a prime sponsor of the Washington Voting Rights Act, which would address racially polarized voting by facilitating electoral data collection and providing a less costly cause of action than litigation under the federal VRA.

A Paul & Daisy Soros Fellow, Rhodes Scholar, Truman Scholar, and three-time cancer survivor, Cyrus is among the few blind lawmakers and only Iranian American elected to a state office in the country. For his recent work in Washington, he has been named one of the “40 Under 40 Political Rising Stars” by the Washington Post, one of “12 State Legislators to Watch” by Governing magazine, and one of the “Most Influential People” by Seattle magazine.

Outside of the law, Cyrus enjoys trying new restaurants and playing jazz piano.

Article by Dov Fox (2007), assistant professor of law at the University of San Diego 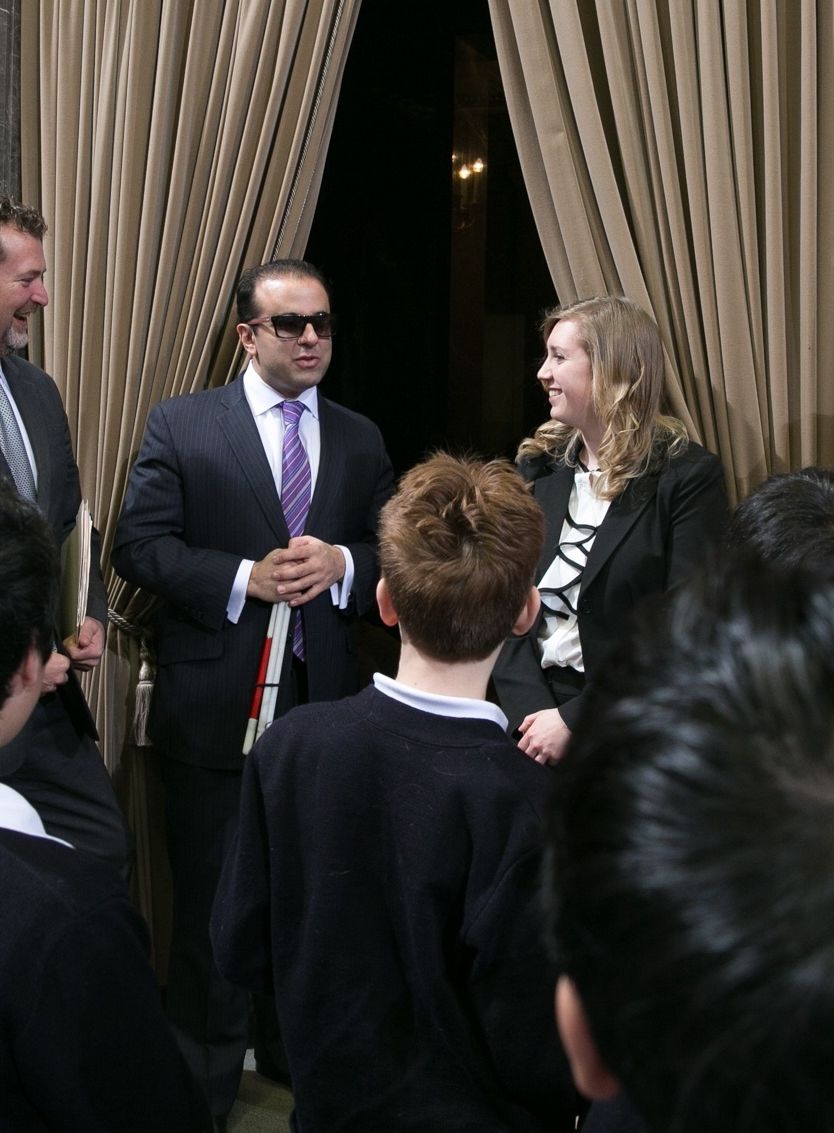 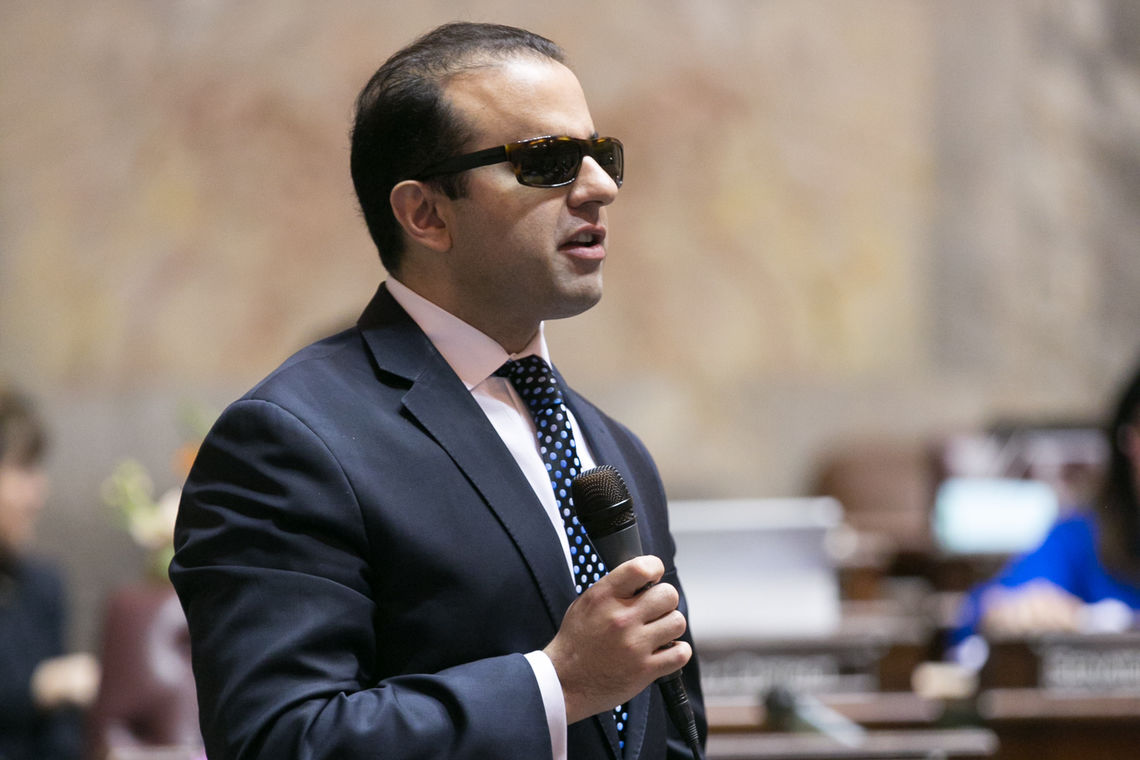 Amar Bakshi staged his project A Portal Between Tehran & NYC: Open for Conversation in New York City’s Lu Magnus gallery on the Lower East Side. The Portal, a standard freight container spray-painted gold by Amar, sat peculiarly in an art gallery with bare walls and raised ceilings.

I arrived at the exhibit both eager and nervous about the impending conversation with a stranger in Tehran. I had a basic understanding of Iran-US relations, enough to know that there was so much I didn’t know. I entered the dark Portal and stood in front of a screen, waiting for an Internet connection with Tehran’s next Portal visitor. Arash, a 24-year-old up-andcoming creative director in advertising, entered.

We spoke, with the help of a translator, of our dreams, the ups and downs of our careers, and the basic things that make our days worth living: for him, fashion; for me, music; for both of us, making a difference, love, and most important, Ping-Pong. It was a simple, poignant exchange, 15 minutes of closeness and understanding.

In the heart of a city that thrives on grit and strength, Amar’s experiment in human connection and vulnerability was a warm welcome. The exhibit will be moving to new cities across the globe over the coming months.