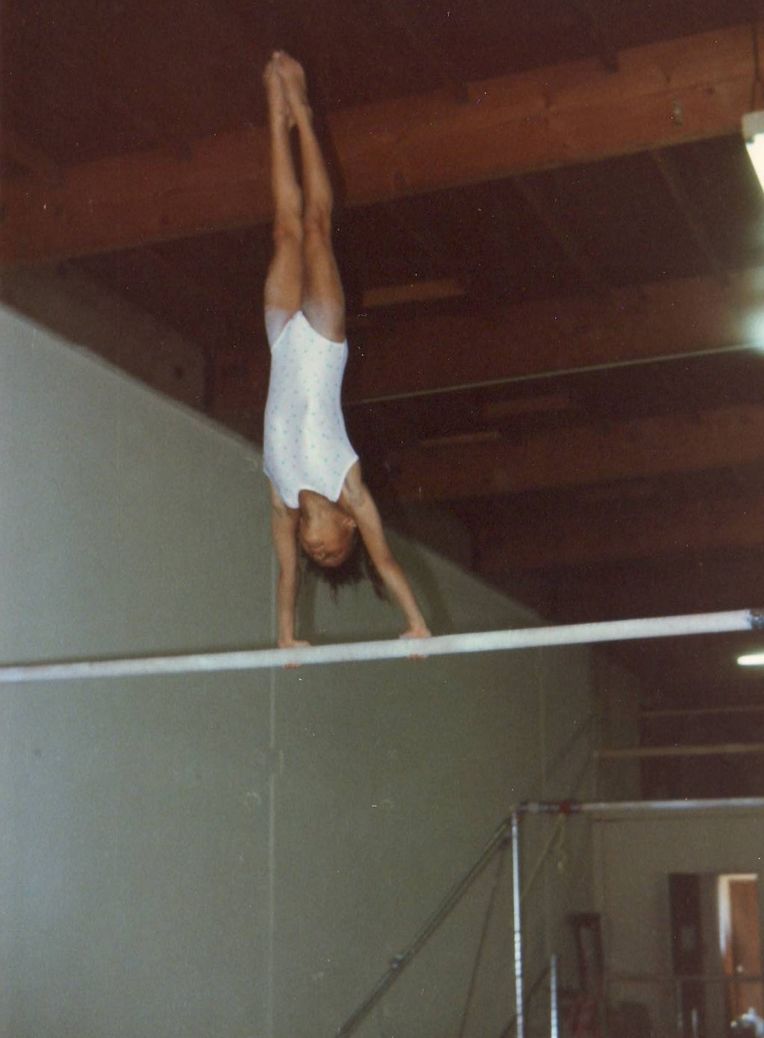 A childhood photo of Amy at a gymnastics meet in San Jose where she was born and raised. 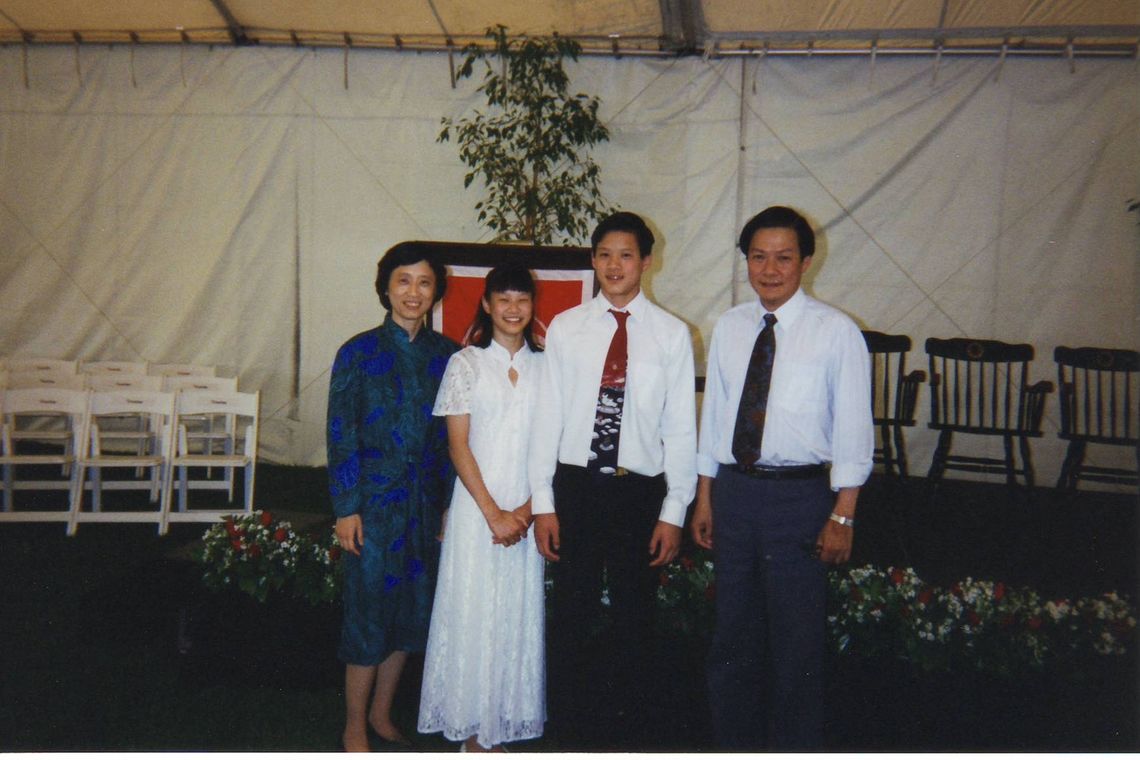 Amy (in the white dress) and the rest of her family at her high school graduation in Palo Alto, 1996. She competed in the Olympics that same year.

When I asked Amy Chow what she remembers most about her interview for The Paul & Daisy Soros Fellowships for New Americans she told me, “I was very nervous.”

It’s hard to imagine how she could have felt that way. After all, she went into the interviews having earned a 4.2 GPA as a biological science major at Stanford University, and she had already been admitted into Stanford’s medical school. Plus, she was a two-time Olympian, a member of the Magnificent Seven, and the first Asian American gymnast to win a gold medal in the Olympics. No big deal.

A month after her interviews she received a call from Warren Illchman, the director of the Fellowships. He had good news. “I remember sitting in my apartment on campus and being so happy. I couldn’t believe it,” Amy recalled.

The following fall, in 2003, she was in New York City at the annual Paul & Daisy Soros Fellowships for New Americans Fall Conference, which is a time for current Paul & Daisy Soros Fellows to meet, get to know one another, and explore their interests. “It was a whirlwind because we did so many different things,” she said. “Graduate students tend to get a little stuck in their own fields, but the Fall Conference weekend was nice because we were such a diverse group—there were artists, writers, scientists—but at the same time, there were so many commonalities. It was fun and different for me.”

For Amy, the Fellowship was not only meaningful to her as the child of immigrants, but it also meant that she could focus on her dream of being a doctor. “I didn’t want to rush through medical school or have to take on additional gymnastics commitments to support myself financially. The Fellowship allowed me to do research and go at my own pace,” Amy said. 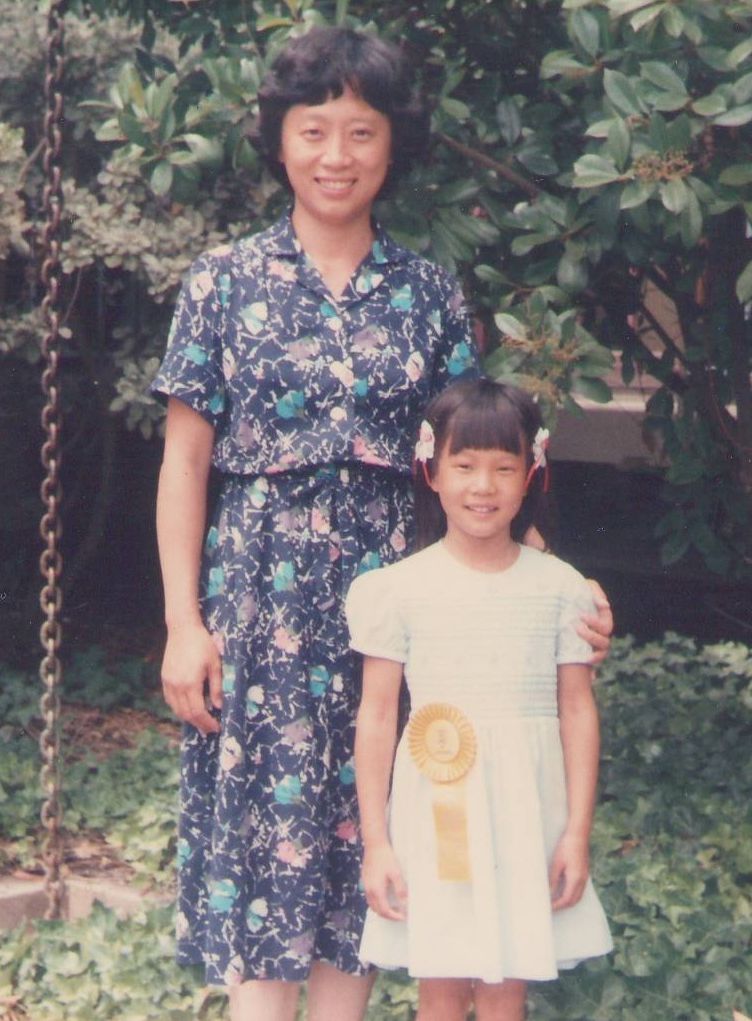 Amy's mom, who grew up in Hong Kong and emigrated to the United States for college, always wanted to be a ballerina when she grew up. Here she is with a young Amy following a piano recital. 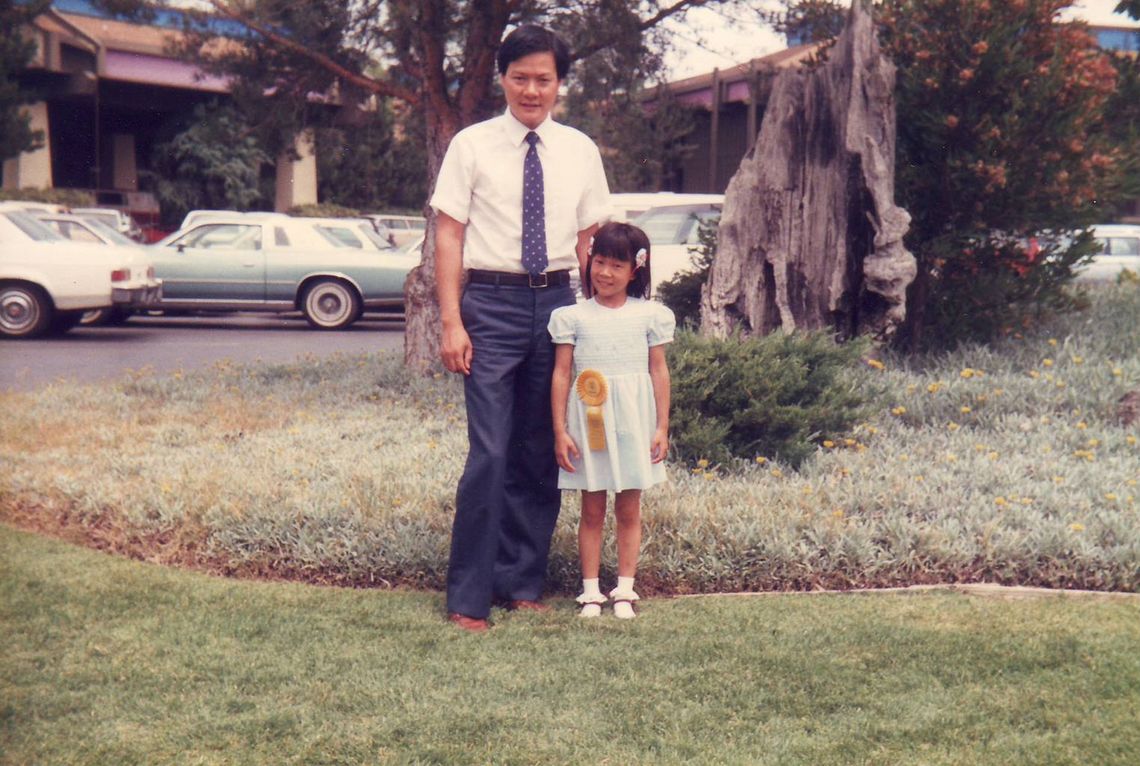 An early family photo of Amy and her father after a piano recital. Amy started gymnastics when she was just three years old.

Her parents didn’t speak perfect English, which was a reminder to Amy of the family’s status as New Americans. But growing up in California Amy was surrounded by ethnic and racial diversity. “My school was very mixed. I knew I was a New American, but I don’t think it affected me,” she explained.

Gymnastics became an important part of the Chow family’s life when Amy was three. “My parents were looking for an activity for me and wanted to enroll me in ballet classes. My mom had always wanted to be a ballerina when she was growing up so ballet was her first choice for me, but I was too young for the classes so they chose gymnastics instead,” Amy explained. “I guess I loved it because when I was old enough for ballet, I told my parents I wanted to stick with gymnastics.”

As her interest in the sport grew, so did the time commitment. Her parents were there for her every step of the way. “They definitely had to put in their share of hard work to get me to where I am now. They had to drive me to practice, and make sure I had what I needed. I can’t thank them enough for that,” Amy said. “They were so encouraging.”

Amy graduated from high school the same year that she competed in the Olympics: 1996.

“There’s a practice day in the arena for all of the athletes before the Olympics begin. Usually there’s only a few people in the stands for the practice days, but I’ll never forget entering the arena in Atlanta—it was completely packed and everyone was chanting, ‘USA, USA, USA.’ I knew at that point that the whole country was behind us,” Amy recalled.

Amy and her teammates, who are known as the Magnificent Seven, won gold in Atlanta. “After I received the medal I walked over to the area where all of the athletes’ parents were and put my gold medal around my mom’s neck. I don’t think I verbally said ‘thank you,’ but I wanted them to know that the award was for them, too.” 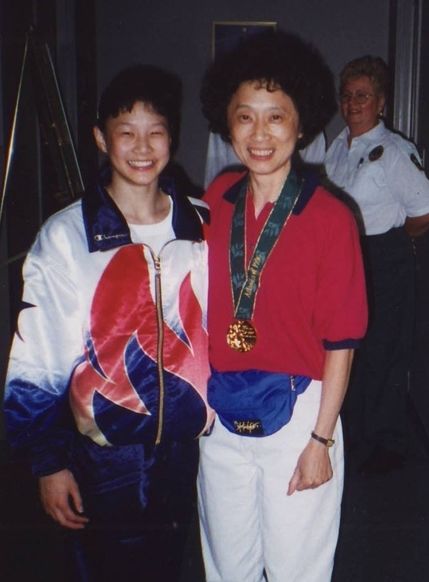 A photo of Amy and her mother right after Amy received her medal, which is hanging around her mother's neck, Atlanta, 1996. 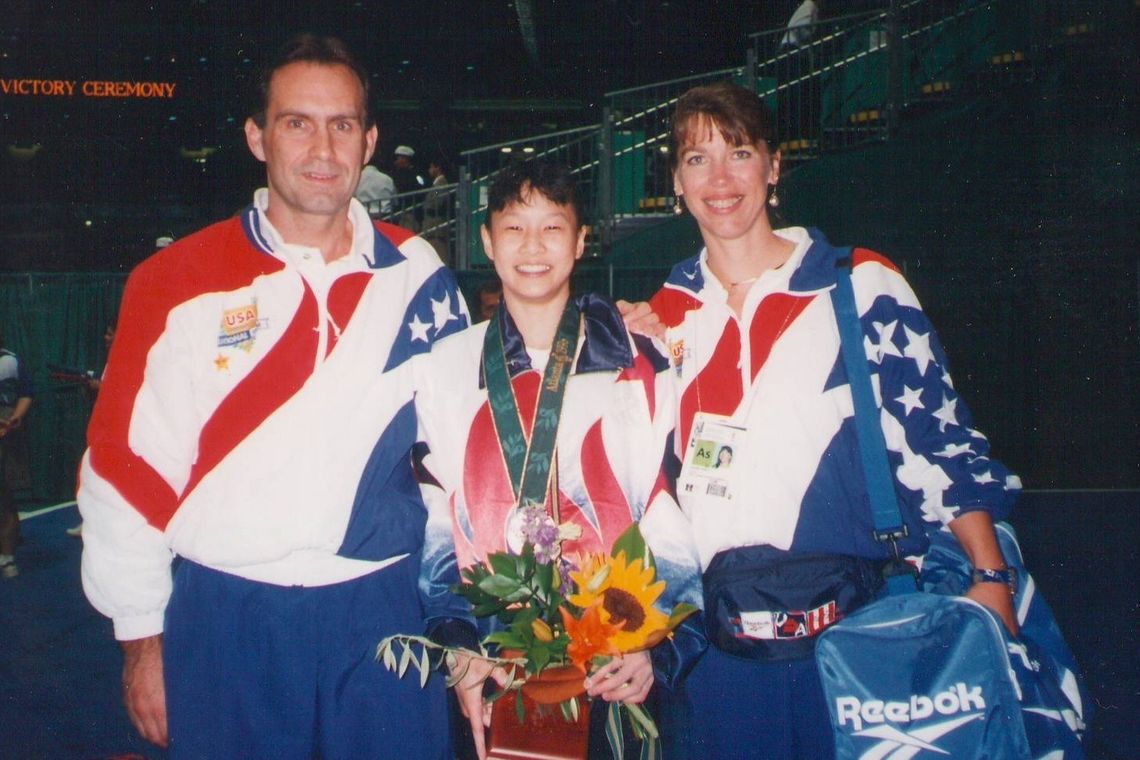 Amy (middle) with her Olympic medal and her coaches, Mark Young and Diane Amos. This photo was from the 1996 Olympics, right after she won a silver in the uneven bars competition.

The First Asian American to Take Home Gold in Gymnastics

Amy hadn’t thought about what her identity as a New American or as a Chinese American athlete meant when she was going into the 1996 Olympics. “I hadn’t thought about it,” she explained. “But after I became the first Asian American Olympian to win gold in gymnastics, people started reaching out to me. I received awards and was asked to speak at events. I realized I was a role model.”

“What I have heard from a lot of Asian American kids, and even their parents, is that Asian culture tends to focus on academics, which is definitely important, but I think a lot can be learned from sport. I hope that with the success of Asian Americans in athletics that more and more Asian parents put their kids into sport or encourage the sporting side of their life as well as the academic side,” Amy explained.

She took a year off of school to tour as a gymnast and then started college. After her sophomore year she took time away from school to compete in the 2000 Olympics and then returned to finish her junior and senior years before going to medical school.

Amy’s gymnastics career helped her succeed in medical school and later as a doctor. “Gymnastics teaches you so much. You go through so much adversity, you work hard, and you learn how to persevere. A lot of those skills translate to medicine.”

These days Amy is a physician in northern California. She and her husband have two young children, who are two and four. She’s says that many of her patients know she is an Olympian, but many don’t.

Amy won’t be going to Rio for the 2016 Olympics but she is excited to cheer on the United States team with her kids from home. This year also marked the twentieth anniversary of the Magnificent Seven’s win at the Atlanta Olympics in 1996. She visited with her teammates and got to chat with some of her own role models this summer in San Jose where the 2016 gymnastics Olympic trials were held. Several celebrations and a parade were held in their honor.

What advice does Amy have for young people? “It sounds so cliché but find something that you love and work hard at it—whatever that may be,” Amy said.

Amy is lucky to have found two careers she loves: gymnastics and medicine. ∎

Amy Chow pictured with her husband, Jason Ho, an orthopedic surgeon, and their two children. They live in northern California. 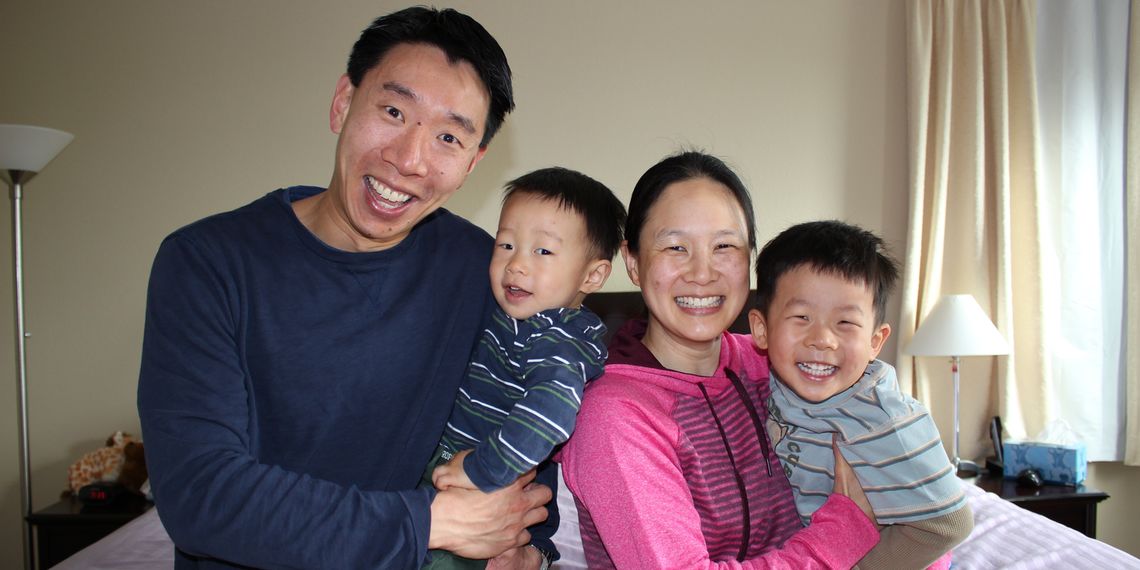