Pursuing the Potential of Abandoned Pharmaceuticals

Rebecca Beyer
Back to News & Events

When Pavan Cheruvu sent Vivek Ramaswamy an email out of the blue in the fall of 2015, he did so because he wanted to work with Vivek, a fellow Paul & Daisy Soros alumnus and the founder of Roivant Sciences, a biopharmaceutical company that aims to accelerate the development of new medicines.

But he wasn’t applying for a job. He was proposing one.

“I realize this is unconventional but I obtained your email from the PD Soros alumni site and I'm reaching out because I've been following your progress over the last year,” wrote Pavan, a 2004 Fellow, on Tuesday, Sept. 15, a few months after Roivant subsidiary Axovant Sciences, which focuses on Alzheimer’s disease and other forms of dementia, had a record-breaking IPO. “In brief, I would like to work with you.”

Pavan, who was working as a fellow in cardiovascular medicine at the time, went on to suggest that he fill a position that did not exist at Roivant—chief of staff. After he sent the email, he told his wife he didn’t expect to hear back. But he did. The same day.

Recalling their introduction, both men laughed during a recent interview in the Roivant offices in midtown Manhattan where Pavan now holds the position he created for himself. After Pavan’s email, the pair connected over the phone on a Saturday at 6:30 a.m. ET, the slot Vivek offered not realizing Pavan lived in San Francisco, where it was only 3:30.

“He sounded fresh as top of the morning,” Vivek said.

Founded in 2014, Roivant—the “Roi” stands for “return on investment”—is parent to a family of subsidiaries that staff members lovingly call “vants.” The companies are focused on rescuing drugs from what Vivek and Pavan describe as the “traffic jam” of the pharmaceutical industry. Roivant invests in drugs that show promise but have, for whatever reason, been abandoned by others, partnering with pharmaceutical companies or universities to complete the development or clinical trial process.

Each “vant” centers on a different therapeutic area. In addition to Axovant, there are Myovant (women’s health and prostate cancer), Enzyvant (rare diseases), and Dermavant (dermatologic conditions). Although none of the companies has a commercial product yet, they are getting close. Enzyvant anticipates a biologic license application in 2018 for a therapy for complete DiGeorge syndrome, a genetic disease; Axovant is completing a Phase 3 clinical study this year on the efficacy of intepirdine (also known as RVT-101) on patients with mild-to-moderate Alzheimer’s.

Vivek’s focus on Alzheimer’s was part of what attracted Pavan to his orbit. Therapies for the disease have eluded researchers for years.  Lawrence T. Friedhoff, Roivant’s chief of research and development, helped create one of the leading Alzheimer’s drugs, Aricept, when he was at the pharmaceutical company Eisai. It was approved by the FDA in 1996. 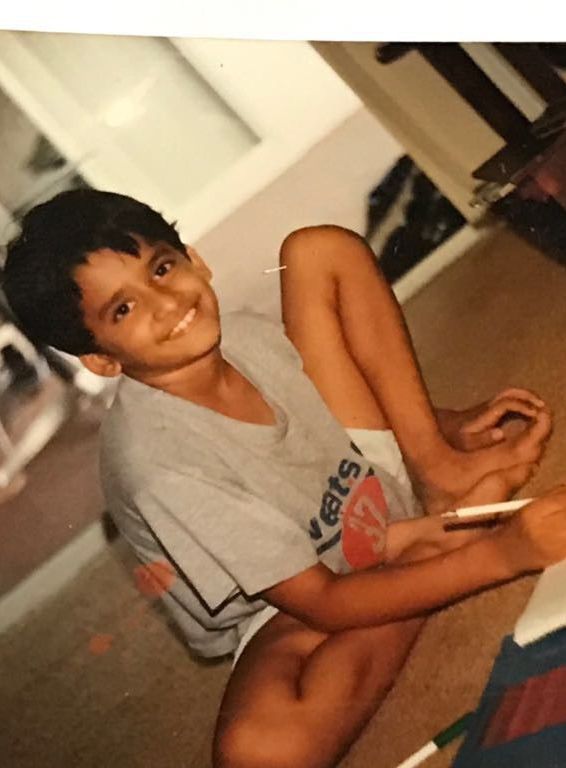 Pavan is the child of immigrants from India. He grew up in Tampa, Florida. 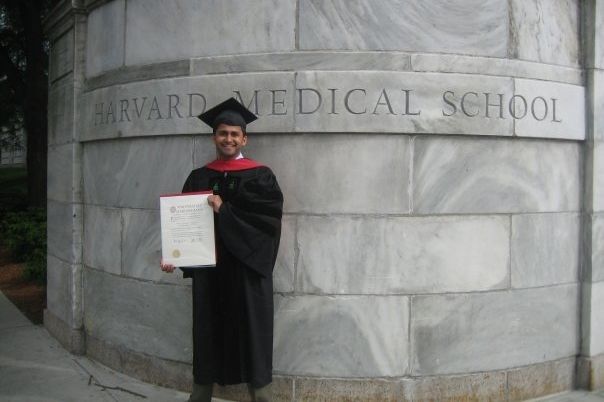 After receiving a master’s in computer science as a Rhodes Scholar at the University of Oxford, Pavan enrolled in the Harvard Medical School and MIT Health Sciences and Technology program. He graduated in 2009.

“Many pharmaceutical companies have said ‘we’re not getting near that with a ten-foot pole,’” Pavan said. “Vivek was able to attract some of the top talent. I believed that he had a really good shot at making a major difference in a field that desperately needed it.”

In December 2015, after several weeks of conversations and discussions with other Roivant executives, Pavan signed on officially as Vivek’s chief of staff and moved from California to New York. In fact, he moved in across the street from the Roivant headquarters.

“The joke is that he can actually access the office Wi-Fi from his apartment,” said Vivek, a 2011 Fellow.

By all accounts, the proximity between Vivek and Pavan is part of what makes Roivant successful today.

Matthew Gline, Roivant’s senior vice president of finance and business operations, said Vivek is a “visionary founder” who inspires his employees. That vision extends to every detail of his companies, whether those details are about finance, human resources, or the mechanisms of a specific drug compound.

“He has incredible depth in everything he touches,” Matthew said. “There are very few people who can go toe-to-toe with those characteristics. Pavan is one.”

Matthew said Pavan and Vivek have a “synergistic working relationship.” If the founder can’t be at a meeting, his chief of staff represents him, and colleagues and staff are able to trust that his decisions and theirs will be appropriately relayed.

Vivek echoed those sentiments, saying Pavan is like a “translator,” helping convert ideas into action. 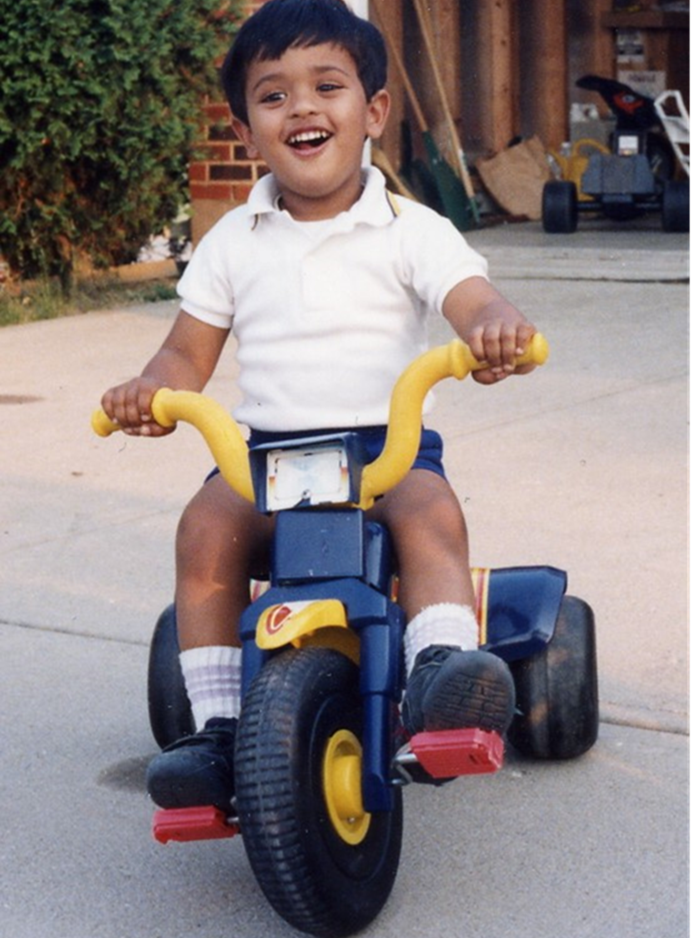 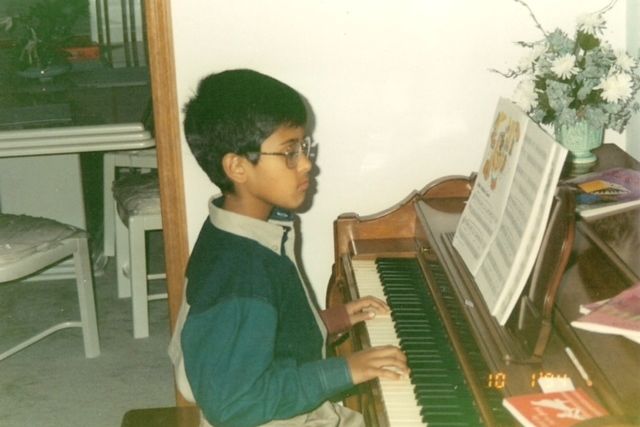 Vivek learned about Alzheimer’s from a young age. He would join his mother, a geriatric psychiatrist, on trips to local nursing homes and the play piano for residents with dementia.

Vivek, 31, and Pavan, 35, agree that one reason things have worked out so well between them is that they have eerily similar backgrounds. Both have parents who met through arranged marriages and emigrated initially to the Midwestern part of the United States from Southern India. Both have doctor moms and engineer dads. Both are married to doctors. And both feel at least in part defined by their immigrant values, especially the importance of family and personal relationships.

Each also draws professional inspiration from early exposure to patient care. For Vivek, that exposure came very early. His mother was a geriatric psychiatrist who treated Alzheimer’s patients in Cincinnati, and, growing up, Vivek often played the piano in local nursing homes for residents with dementia (Vivek’s mother came out of retirement to help lead Axovant’s outreach to physicians and caregivers of individuals with dementia; his younger brother, also a doctor, works at Axovant on medical and scientific communications).

Alzheimer’s “is different than other diseases,” Vivek said. “It really goes to the core of your humanity. The biggest victims, from my mother’s experience, more than the patients, were their families. That struck a particular chord with me having grown up in such a tightly-knit extended family.”

Vivek’s decision to focus Axovant on Alzheimer’s and other forms of dementia and to be chief executive officer of that company is no coincidence.

“I would not have had the same personal commitment to Alzheimer’s disease if it had not been for my mother and my upbringing,” he said.

For Pavan, the realization that he wanted to find a way to have a larger impact on patients came when he was working as a cardiovascular fellow at the University of California San Francisco.

“I would see patients who had been treated with drugs that showed a lot of promise but were no longer available because the company developing that drug abandoned it midway through the process,” he said.

That is precisely the problem Roivant was created to address. By focusing its attention and—because of successful capital campaigns—considerable resources on drugs that otherwise might not have been developed, Roivant hopes to bring medicine to patients in a quicker, more cost-effective way. It’s the “humanitarian” mission behind an assuredly profit-seeking enterprise, Vivek and Pavan say.

“It is staggering the amount of private and societal investment that has gone into those drugs, and to see them go by the wayside is wasteful—it’s just wrong,” Vivek said. “Our goal is to realize the value of those drugs that never would have seen the light of day if we had not gotten involved.”

The other major problem in the industry that Roivant hopes to tackle is the high price of drugs, in part through the application of new technologies. One innovation? For the intepirdine trial, called MINDSET, which has approximately 1,150 Alzheimer’s patients enrolled at 175 sites around the world, a Roivant lawyer who doesn’t have a pharmaceutical background suggested using the rideshare app Lyft to make sure participants show up for their site visits. It was an incredibly simple solution for a major obstacle in clinical trials involving dementia.

Both Vivek and Pavan emphasize that they hope to disrupt the pharmaceutical industry by stacking their company with the people who know it best and the people who don’t know it at all. To round out their pharmaceutical chops, they look for “high performers” in other areas like technology or finance. Pavan himself considered opportunities at Google and McKinsey & Company—where he had worked before his residency—prior to joining up with Roivant.

“I often tell candidates, if your decision is between coding the next app that puts a mustache on someone’s face or being involved in an industry where you can have an impact on millions of people’s lives, to me the choice is pretty clear,” he said. “And we hope to create the kind of environment that attracts precisely those people.”

For now, the impact of Roivant and the rest of the “vant” family—on drug pricing, the healthcare system, and patients—remains to be seen. They still don’t have any drugs to sell.

That was an early criticism of Vivek and Axovant when that company exploded onto the market without an FDA-approved drug to its name—that both were indicative of a biotech “bubble,” shiny and pretty but not here to stay.

Vivek rejects those claims, saying, “the need for a more innovative and efficient drug development process is something that withstands the test of time.”

Pavan agrees. It’s why he moved his wife and young daughter across the country and, ultimately, across the street from Roivant.

“I told my wife, ‘I think if we do this right, this will be the way pharmaceutical companies are conceived of in the future,’” he said. “We’re not doing this as a sort of flip-to-sell approach. We’re really here for the long haul.” ∎

April 10 update: Axovant's new CEO is David Hung. Vivek Ramaswamy will remain on the board of directors and assume the fulltime role as CEO of parent Roivant Sciences.