The 2021 Fall Conference In Review

The 2021 Paul & Daisy Soros Fellowships for New Americans annual Fall Conference was held in Nashville, Tennessee the weekend of October 22 to October 24, 2021. The Fall Conference is an annual tradition of the program, which has brought together every class of Paul & Daisy Soros Fellows in their first and second years as Fellows for the past 23 years. The long weekend of activities builds friendships amongst classes and is the cornerstone activity in shaping the Fellowship’s strong alumni community.

Why Nashville? People from all over the country and world are choosing the Music City as a place to call home, and immigrants are no exception. The weekend was an opportunity for Fellows to explore an iconic American city as well as larger questions around the opportunities and challenges that the South presents, particularly for New Americans. Always hospitable, Nashville has an Office of New Americans that champions the diverse perspectives of immigrants in the city, and which also helped guide the planning of the Fall Conference.

Flying into Nashville from all over the country, Paul & Daisy Soros Fellows gathered over dinner on Thursday evening to meet one another in-person, often for the first time. Later in the evening, singer and songwriter Joy Oladokun performed for the Fellows and had an on-stage conversation with 2020 Paul & Daisy Soros Fellow Mohamed Ismail about her music, her inspirations, finding joy, and her family’s own immigrant story. 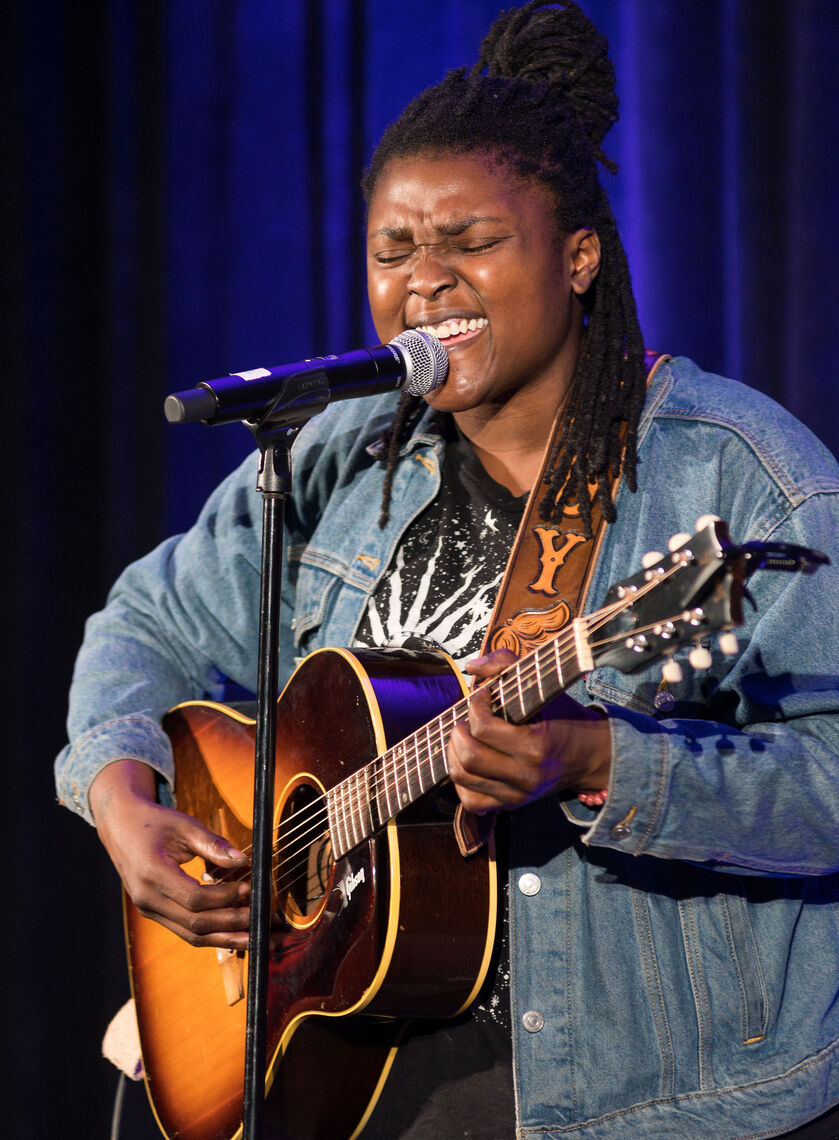 Joy Oladokun performed songs from her latest album, "In Defense Of My Own Happiness" for Fellows at the Fall Conference. 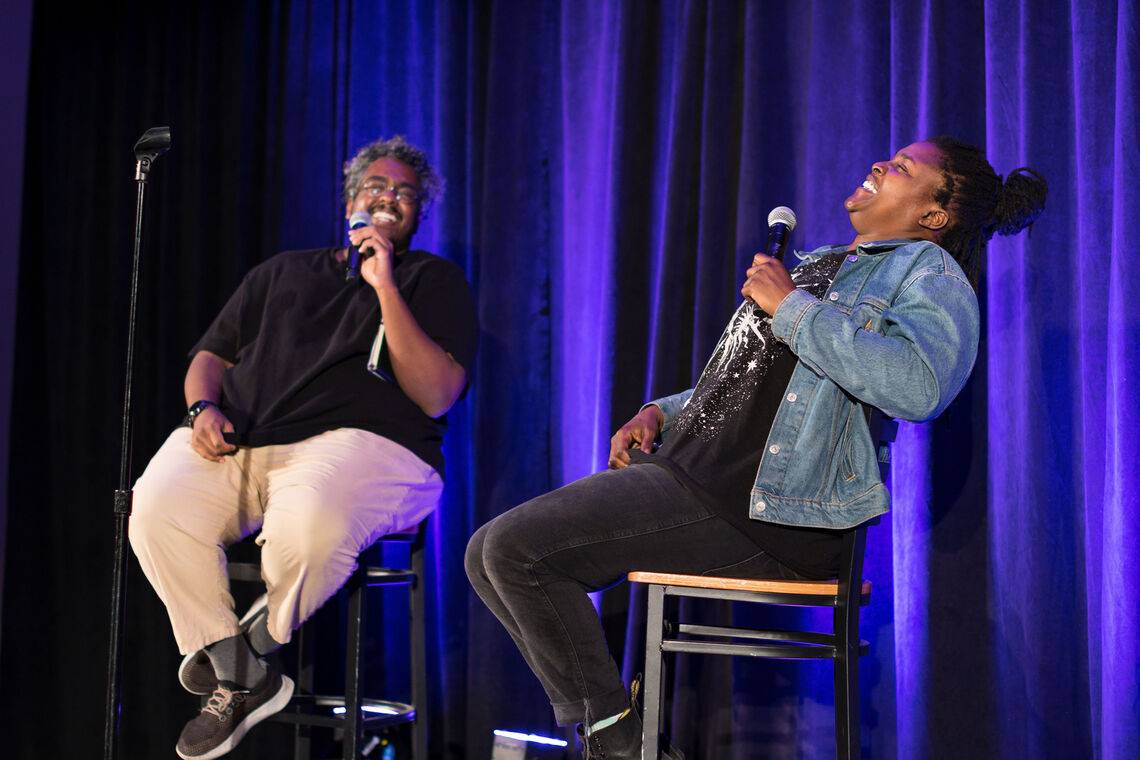 Singer and songwriter Joy Oladokun performed for the Fellows and had an on-stage conversation with 2020 Paul & Daisy Soros Fellow Mohamed Ismail about her music, her inspirations, finding joy, and her family’s own immigrant story.

On Friday morning, Fellows split up and were able to do one of two tours—they could either visit the new National Museum of African American Music in downtown Nashville or do a special tour of Nashville that was led by Fabian Bedne, of the Mayor’s Office, that focused on New American Nashville. The New American Nashville tour visited Casa Azafrán and Conexión Américas, the Salahadeen Center and Mosque of Nashville in “Little Kurdistan,” and Plaza Mariachi.

The Fall Conference officially kicked off at the Tennessee Immigrant & Refugee Rights Coalition’s beautiful brand-new headquarters in the Antioch neighborhood of Nashville. Fellows gathered over food from immigrant owned food trucks, Chivanada, Jose’s Kitchen, and ChezLama, while Mariachi Olimpico, a Nashville mariachi band, played. Every Fellow had provided a fun fact about themselves in advance of the weekend and during lunch they were given someone else’s fun fact and then told to find the person whose fun fact they had—the fun facts certainly made for good conversation!

The Friday afternoon of programming included a get-to-know-you activity and a conversation on the opportunities and challenges that Nashville’s growth has presented. The conversation, moderated by Robert Fisher, was between Nashville’s Stephanie Kang and Fabian Bedne, who discussed the shifting appeal of the city, the public health and planning challenges the city faces, and the opportunities they see ahead. Robert Fisher is a senior advisor at Results for America—a national nonprofit organization that helps public sector leaders use data and evidence to better serve their communities. Before joining RFA, Robert served as deputy chief of staff to Nashville Mayor John Cooper. Dr. Stephanie Kang is the director of the newly-launched Health Equity Bureau for the Metro Public Health Department and Fabian Bedne, a trained architect who was Nashville’s first Latino Metro Council member, is the senior manager of community development for the Office of the Mayor.

Fellowship Director Craig Harwood surprised the Fellows with a musical performance on Friday afternoon. A bluegrass musician, Dr. Harwood sang and played “Uncle Pen” and “Sittin' On Top of the World” with a small band and discussed the history of bluegrass and the impact that African Americans and immigrants had on the genre.

On Friday evening, the 2020 and 2021 Fellows attended a cocktail reception hosted by the Soros family in the Skye Lounge at the very top of the Sheraton Grand in downtown Nashville, offering magnificent nighttime views of the city. Poets Joel Francois (2020 Fellow) and Hajjar Baban (2021 Fellow) performed some of their poetry and Daisy Soros gave remarks welcoming the newest cohorts to the Fellowship community. The reception was followed by dinner at popular Nashville eatery The Mockingbird.

Meanwhile the 2019 Fellows had the chance to unwind and reconnect with each other at Lyra, a lively Middle Eastern restaurant in East Nashville. A small reception was followed by dinner, and a surprise greeting by Lyra’s chef Hrant Arakelian, himself the child of an immigrant father from Lebanon and a mother from east Tennessee. It was an evening of delicious meals, and rekindled and new connections.

Following their morning inside, the Fellows broke up into groups for the afternoon to explore the city. Fellows had their choice of several unique tours, including two often visited sites, the National Museum of African American Music and Cheekwood Botanical Garden, as well as three less conventional tours.

One group of Fellows visited The Healing Trust, a non-profit that aims to increase access to quality, compassionate healthcare for vulnerable populations across Middle Tennessee, guided by Jen Bailey, a reverend in Nashville who is also on the board of the organization. Reverend Bailey recently released a new book, To My Beloveds: Letters on Faith, Race, and Radical Hope and was able to share some of her work as the leader of the Faith Matters Network. Another group visited Thistle Farms, a cafe and store that has a remarkable model for uplifting women who are survivors of trafficking, exploitation, and addiction.

Finally, two groups of Fellows had the opportunity to visit with the Nashville Food Project. One group took part in a “Stories of the Land” workshop at the Community Farm at Mill Ridge, which explored storytelling, land justice, archival work, and reimagining systems. The second tour got to know The Nashville Food Project’s market garden program, Growing Together, which engages farmers who are interested in growing produce to sell, generating personal income and building community food security along the way. Growing Together is designed to expand access and opportunity to people from agrarian backgrounds through access to land, resources, training and technical assistance, and marketing support. The program currently supports farmers who arrived in the United States as refugees from Burma and Bhutan, and some were present to share their experiences with the Fellows with the help of translators.

What would Nashville be without a live performance at one of the city’s great music venues? On Saturday night, the Soros family, members of the board of directors, and the Fellows came together for a wonderful dinner and performance at the Grand Ole Opry. The Grand Ole Opry was celebrating its 4,999th Saturday Night and put together a fantastic lineup of performers, including Carrie Underwood. Other performers included Tenille Arts, John Berry, Ian Munsick, Bobby Osbourne, Riders in the Sky, Jeannie Seely, and Sam Williams. A recording of the night can be seen here.

The theme of not only Nashville, but the South more broadly, was central to the weekend. On Sunday, Fellows heard from three Paul & Daisy Soros Fellows who are living and working in the South. Moderated by 2017 Fellow Caleb Gayle, Fellows heard from Professor & Chair of Bicultural-Bilingual Studies at the University of Texas at San Antonio Patricia Sanchez (1999 Fellow), the Director of Ars Lyrica in Houston Kinga Ferguson, and Jones Day law firm Partner Jamila Hall (2000 Fellow) who is based in Atlanta. Caleb is the CEO of the National Conference on Citizenship, an author, and a Harvard MPP/MBA graduate who grew up in Oklahoma.

Alumni are an important piece of every Fall Conference, and this year several of the PDSFA board members, including Roxana Daneshjou, Eric Chung, and Shirag Shemmassian came to Nashville to welcome the newest classes. Dr. Daneshjou, who is the chair of the PDSFA, addressed the Fellows at the end of the Fall Conference to welcome them into the larger community and tell them about all the ways they can get involved.

The 2021 Fall Conference ended with comments from Craig Harwood, Peter Soros, and Daisy Soros. Mrs. Soros talked about Paul Soros’s life and what inspired them to start the Fellowship.

“When my husband came here in 1948, he was an Olympic skier for the ‘48 Olympics and defected and came over here with a Leica camera and $20,” Mrs. Soros said. “He needed to go back to school to get his master’s in engineering. He was accepted at Harvard and Stanford and MIT—he couldn’t afford the tuition, so he went to a place called Brooklyn Poly. He always said if someone would have just given him, at that time, $10,000, his whole life would have been totally different.”

After Mrs. Soros welcomed the Fellows to the community the Fellows gave her a standing ovation. It was a beautiful ending to a memorable Fall Conference in Nashville.