Eva Recinos
Back to News & Events 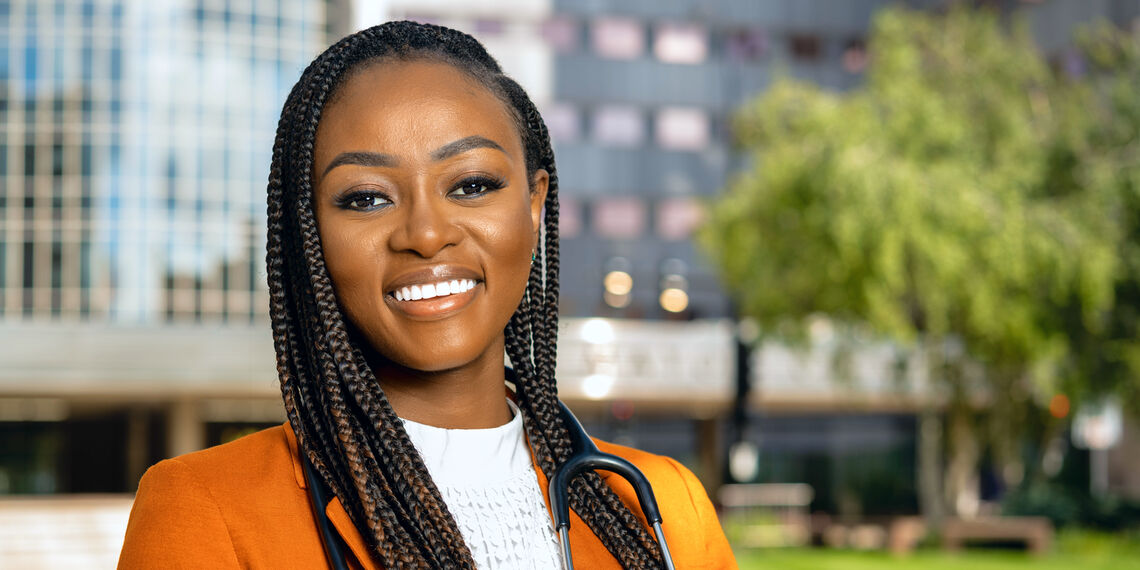 Looking back on her journey, there’s a major philosophy that 2022 Paul & Daisy Soros Fellow Christeebella Akpala now keeps in mind: “If you have a purpose, your plans may change, but your purpose will still remain the same.”

As a 17-year-old arriving in the United States, her assumptions about life in America were soon taken apart at the seams. In those early days, she noticed the modern amenities in this new country, a sight to behold for a teenager coming from a rural area in Nigeria. But soon, she realized she needed to fend for herself—something she’d never done before. In the United States, she lived in homeless shelters and, largely because her student visa made it difficult to get a job, worked at Subway for seven dollars an hour.

“I didn't have the choice to not be strong and motivated because there was no one coming to my rescue,” says Christeebella. “And I knew that. Even a choice as simple as going back to Africa—I didn't even have money to get a ticket to go back.”

Growing up in Nigeria, she remembers rarely seeing doctors—but every time she did, her admiration for them grew. Her new life in Texas was difficult, but she started taking one class a semester, the most she could afford, at Tarrant County Community College (and Community College of Baltimore County) to become a nurse.

Once she became a Certified Nurse Assistant, she learned what it was like to carry out physicians’ orders in terms of patient care. Over time, she wondered if she could serve her patients better. If she learned the knowledge to become a physician herself, what more could she do?

But Christeebella’s plans were interrupted when she received a diagnosis for a chronic illness in December of 2019. She began losing hair quickly, and “looked like a ghost,” as she describes it. She deleted her social media accounts and largely kept to herself—until the solitude became too all-consuming.

After shopping for wigs, she realized they were a serious investment. She bought materials online to make her own, more affordable versions. The first wig wasn’t up to Christeebella’s standard—it looked too “wiggy.” It was a short bob, made with synthetic hair fiber in a light brown, auburn color. She says it smelled like “synthetic rubber, almost like burnt tires.”

But she soon perfected the art. With a wig and lashes on, she started going out again, and slowly, feeling more like herself. After connecting with someone via Instagram going through a similar medical experience, Christeebella realized the value of making wigs for others. Unable to work as a nurse or go to school because she was in treatment, she turned to wig making to pass the time while also giving oncology patients something positive to hold on to as they were going through rough times.

“I really valued my ability to contribute to society, my work in the hospital,” says Christeebella. “I really liked working in the hospital. So, when I was unable to do that, I felt lost. I felt like I lost my sense of purpose, and I felt like I was useless to the world. But then when I started [making wigs], and I saw how much of an impact it had on people, I got overwhelming fulfillment from that.” 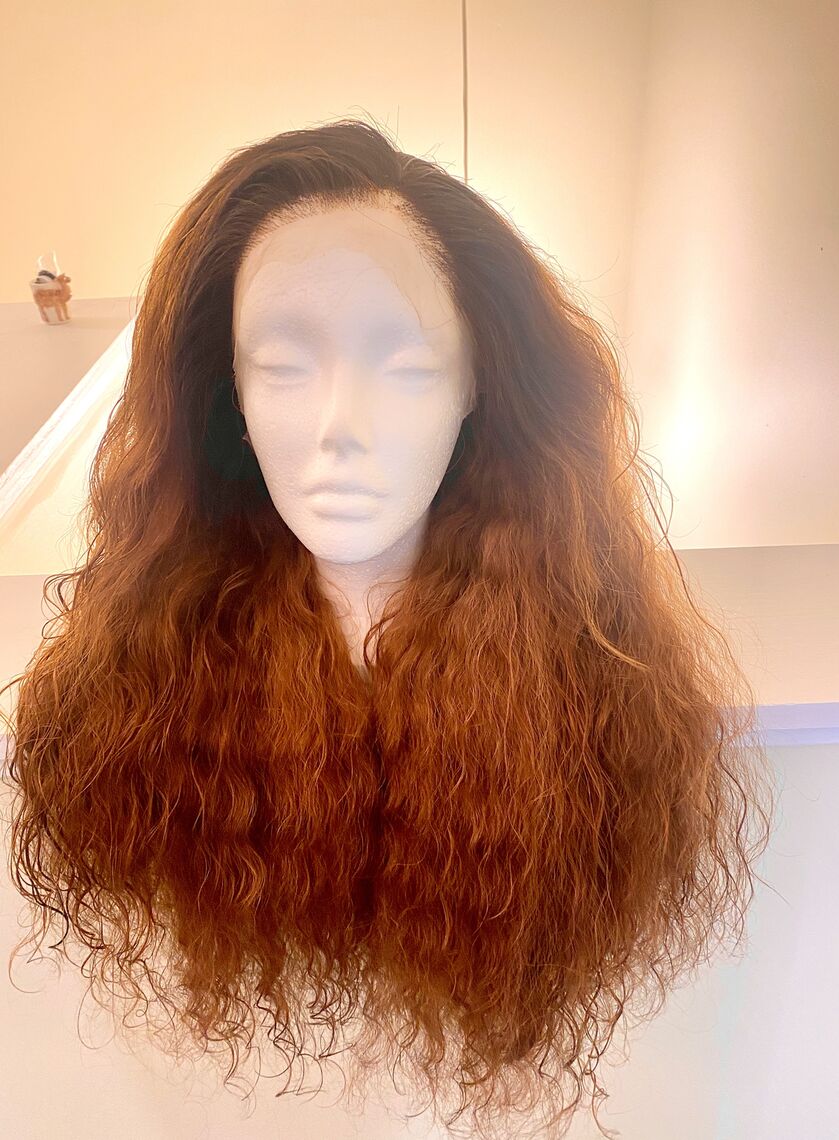 One of the wigs that Christeebella has made. “Knowing that someone else was depending on my handwork to hopefully help them crawl out of the deep dark hole of chemotherapy gave me an even better incentive to put in my best. Eight wigs later, I was finally proud of my product,” she said. 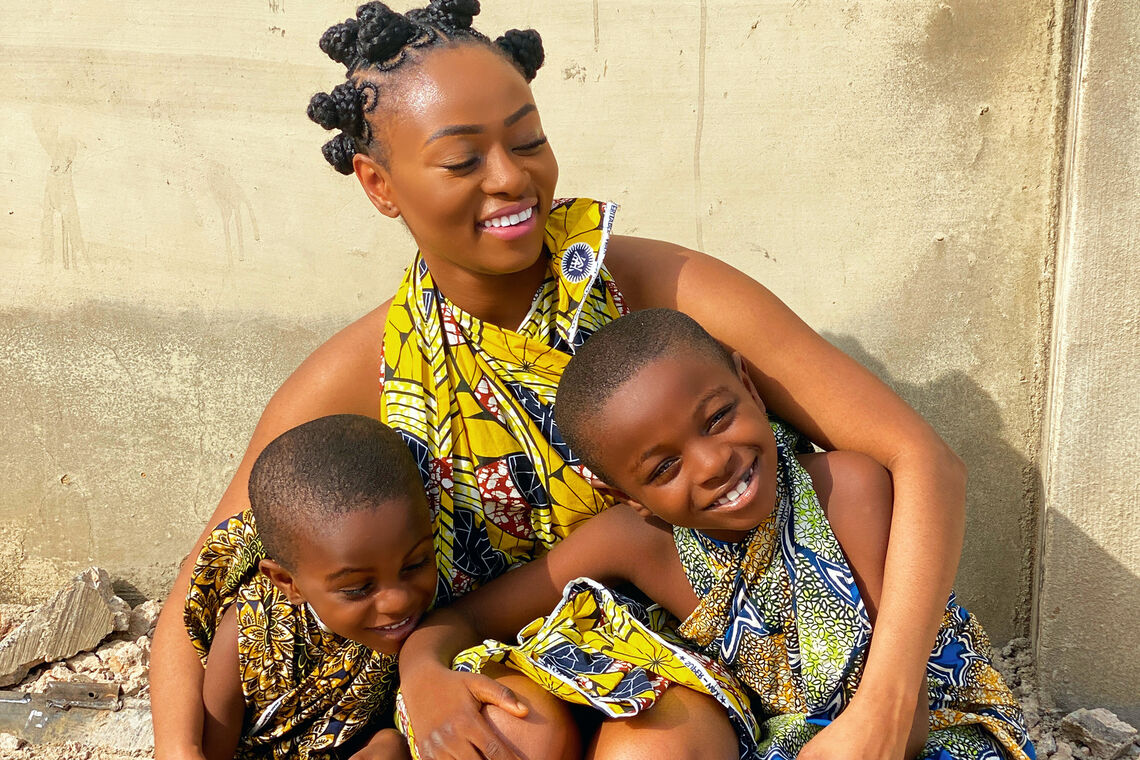 A photo of Christeebella Akpala and her nephews soaking up the sun.

Christeebella created more new pieces, and soon started giving the wigs their own names. “I remember ‘Eva bangs’ because the recipient wanted bangs,” she says. “Knowing that someone else was depending on my handwork to hopefully help them crawl out of the deep dark hole of chemotherapy gave me an even better incentive to put in my best. Eight wigs later, I was finally proud of my product.”

The process became an important part of her journey—making wigs for others brought Christeebella back to her purpose.

“I have always believed that the impact of my life isn’t measured by how far I am able to rise from destitute conditions, or how I am able to help my family in Africa, or how comfortable my eventual life is,” she said.

“True fulfillment for me is being able to have others benefit from my work, and that the paths of those that come after me are made easier because of my contribution to society.”

When asked how she found the strength to keep going in the face of immense obstacles, Christeebella says: “You know, I have been through hell. Living in Nigeria felt like hell, but coming to America was surprisingly harder. It was not the promised land like I saw on TV. I went through situations that blinded my senses to the possibility of a light at the end of the tunnel. I kept going because I was already in hell. Why remain there? I just kept going because I thought: Worst case scenario, I’d end up in another part of hell. Best case scenario: I find a way out of it.”

Christeebella is currently working towards an MD at the Mayo Clinic Alix School of Medicine, and spent five to six days a week—for two years—working with COVID patients across the country during the worst of the pandemic. She’s also part of the team working on a Mayo Clinic COVID-19 registry that gathers data from hospitals around the world. The information will help create a record of COVID infections and treatment methods, to better understand its effects in the long term. No matter her focus, Christeebella is clear in her goals for both her career and life’s mission.

“If there are any gifts or talents I have been given or I've realized that I have, I want to use it for the benefit of others as well,” Christeebella says. “Not needing an audience to create change has been a big realization for me. My situation and journey showed me that even when no one is looking or noticing, I can still change others’ lives one person at a time.” ∎